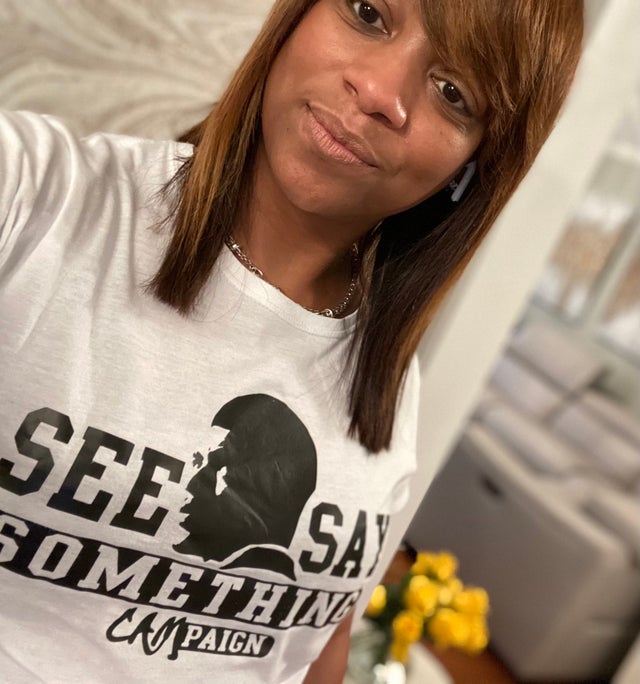 We Have an Opportunity to Do Things Right This Next Round

In 2015, a 19-year-old aspiring dentist was killed in his community. Cameron Selmon, a thriving scholar, singer, and recent graduate attended an event in which he was gunned down by violence in the neighborhood.

Stacie, his Beloved mother, mourned as justice had not been served for young Cameron.

Today, Black men and teens are killed at alarming rates compared to other groups. No words can adequately describe the pain a mother feels when her child is killed senselessly to violence. But while most mothers crumble under such destruction, Stacie has launched a powerful work that helps youth escape violence via education and the arts.

Her organization, Justice for Cameron, is on a mission to provide support for community and families who are victims of gun violence through education, prevention, advocacy, and awareness.

In partnership with her work, The Felecia Killings Foundation will raise $1,000 each month to support the empowering outreach Mama Stacie provides to young adults in her community.

Funds from our monthly campaign are spent as follows:

Our "Conquering Violence and Empowering Youth" campaign is our second partnership within the Movement (alongside "Fighting Human Trafficking with Eliza Bleu"). We are committed to supporting women on the front lines who are bringing healing, deliverance, and restoration to their communities.

The Conscious Conservative Movement is a national Kingdom work committed to helping authentic Black leaders build social, political, and economic empires based on spiritual principles. Stacie's work is a social movement. Therefore, we are proud to be a partner with her as she conquers violence in the communities.

Your contributions towards this dynamic work provides proof to Black communities nationwide that Conservatives will show up in a powerful way.

So, come be a blessing today with your givings!

The Law of Sowing and Reaping is ALWAYS in Effect.

"Nobody Ever Addresses Black-on-Black Crime," Said All the Ignorant Ones

Early this morning, I conducted some research to learn more about gun violence in Black communities. The stats I encountered were alarming:


These stats simply tell the outcomes of larger issues, but too few are willing to address all the causes that lead to such destruction.

On the Left, we have advocates pushing for more gun laws. They use data like the above to prove why increased gun sales are a direct correlation to gun violence.

On the Right, we have strong 2A advocates who argue, "All gun control is racist." And being on this side, I know our activists not only teach why such laws directly harm communities, but they deliver safety training to teach community members how to stay armed and protected.

But it isn't very often we hear the real stories of what's happening on-the-ground among the most vulnerable in these communities. We don't often hear about the victims and their families unless mainstream media highlight them.

Even worse, we hear very little about the empowering work Black Americans are doing locally to address, confront, and conquer violence in their communities.

Two weeks ago, I came across one such story. One of my Twitter Class Beloveds told me about a Black mother in Tennessee, Stacie, who is working locally to change the lives of youth.

In 2015, her son was gunned down, and the criminal justice system could not provide any help to her because witnesses backed out of testifying against the gunman.

Can you imagine the type of pain a mother feels, knowing who killed her son and being unable to secure justice in his name? The heart-break. The betrayal.

And to experience this in the freest nation of the world.

Stacie's story is like that of many other Black mothers whose families are living in communities that experience such violence.

But unlike what many conservative media outlets portray, these mothers aren't sitting down quietly, doing nothing about these atrocities. They're speaking up. They're protesting. They are leading movements locally to bring about the right change.

But you won't see that, Beloved.

And you know what I mean when I say this. Instead, you see how Conservatives behave when the infamous "black-on-black crime" tweets emerge from their favorite pundits' timelines.

Conservatives resort to shameless name-calling. They berate the victims and their families. They tweet obscenities like "These folks are like wild animals, circus monkeys, and chimpanzees."

And then they proceed to yell, "Nobody ever addresses black-on-black crime."

Oh, how the ignorant love to boast in their ignorance.

For years, we within the Conscious Conservative Movement have told thousands of our followers, "Black Americans are building. They are not destroying. They need our help to support their work."

And I purposed to bring as much proof to the table to show you how it's being done.

The reason Conservatives do not see Black Americans pushing against violence in their communities is because your pundits don't want you seeing it. Conservative media (like other outlets) are addicted to Black trauma. They love shouting the "Chicago crime stats" because it makes White Conservative weirdos feel superior in their ignorance.

And let's not forget the other side in this critique. Progressive media withhold these stories because they love Black trauma as well! Oh, let a Black man be gunned down by a white officer, and BLM evangelists will QUICKLY show up to collect White Guilt donations.

The exploitation happens on both sides, and caught in the middle are Black parents like Stacie, who must deal with this gross injustice while never receiving the type of attention her work needs so more youth can be empowered.

Thank God, the Conscious Conservative Movement is here. We have developed our own Media Network, which is a communications conglomerate, bridging the gap between Black Americans and Beloved Conservatives. Since launching in 2019, we've reached millions online. And now with our team of content creators, Network professors, evangelists, and offline speakers, we are taking the empowering message nationwide.

But we aren't simply focused on our work.

We are also partnering with other organizations and movements to help them gain attention and traction for their works. Women like Stacie are on the front lines, creating community programs that directly help youth stop the violence using the arts.

We're blessing women like Eliza Bleu, who is the only voice in this massive conservative movement bringing awareness of Black girls trapped in the human trafficking industry.

And we will continue partnering with others each year so this nation comes to see the Kingdom of God at hand.

I've shared this message for years, and I will repeat it here: In this hour, God is using the least of these to fulfill His plans and purposes. He will take even the hardest stories and show us how to use them to bring deliverance to others.

When the Holy Spirit asked me to launch this virtual ministry in 2016, I had no idea the impact my story and voice would make on other women. But I am proving to them that no story is too scandalous or controversial for God to use. For this reason, I invest extensively in women like Stacie or Eliza, because their callings are unique and necessary to the social environments.

But they aren't the only ones. You, Beloved, also have something to contribute to your community. Whether male or female, you have a gift and calling. You have an unction to do a work.

Ask the Holy Spirit for wisdom regarding your purpose; and in due time, when you are ready to launch, The Felecia Killings Foundation will be here to support you.

Today, make the choice to be different, to be empowering, to be "Solutionary." I guarantee, if we continue doing things God's way, we will get His results.

Stay blessed, Beloved, and come be a blessing to our initiative.