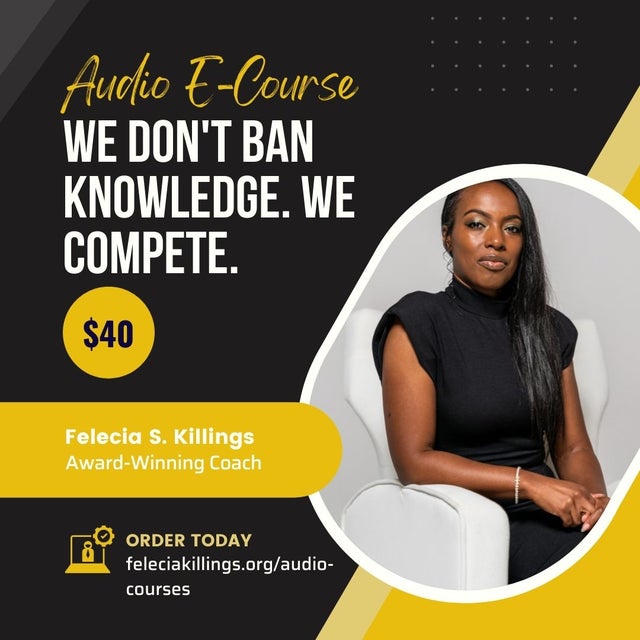 Audio E-Course | We Don't Ban Knowledge: We Compete on the Battlefield of Ideas

​From Best-Selling Author and Award-Winning Coach, Felecia Killings, comes a new audio e-course that teaches Conservatives how to battle complex ideas and win in the social media townsquares.

We Don't Ban Knowledge: We Compete on the Battlefield of Ideas challenges today's conservative base to think differently about how they tackle issues in the online space, which translates into actions offline.

Too often, when Conservatives see ideologies emerge that go against their core beliefs, they run to government to suppress these ideas. From Theory of Evolution to Critical Race Theory, Conservatives readily depend on Republican politicians to be their political saviors. Rather than spreading their ideas via the Culture or through fellowship, they demand politicians ban knowledge without considering the future ramifications of such regulations.

In this empowering course, you will learn strategies for engaging effectively on the battlefield of ideas so conservatism remains the dominant ideology in this country.

This four-part, 140-minute audio course comes with teachings on:

As a BONUS, you will receive a FREE copy of Felecia's best-selling e-books, The Fifteen 20 Rise and Progressivism is NOT Charity, with your order! (An $85 value total)

We Don't Ban Knowledge: We Compete on the Battlefield of Ideas is sold exclusively at The Felecia Killings Foundation, and is available for purchase right now. Your downloads will be sent to your inbox immediately.